On 2/17/16, St. Vincent’s Healthcare had a dedication ceremony unveiling the bronze statues celebrating 100 years of service from the Daughters of Charity, who came from Emmitsburg, Maryland in 1917. They were invited by the city fathers in 1917 to turn around the failing DeSoto Sanatorium in the Springfield area of town. Meeting this challenge with success, the sisters were moved to the Riverside area of town and renamed it St. Vincent’s Hospital. 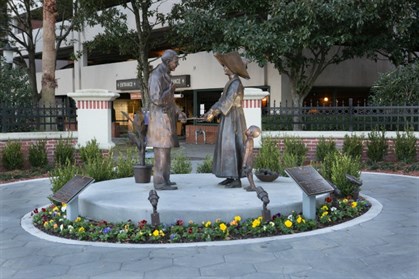 This sculpture was created by Captain Robert L. Rasmussen, USN who served in the Korean War and Vietnam. He was also a member of the Blue Angel Squadron from 1956 to 1960. The sculpture depicts a young Daughter of Charity handing a crucifix to a physician, symbolic of “passing on the mission” of service to the sick and the poor. The child holding onto the sister’s skirt represents all of us in the community that hold dear the vision and mission of the Daughters of Charity. A basket of oranges and a palm tree are nearby, representing the actual gifts given to the Daughters of Charity by the Bishop of the Diocese of St. Augustine.

The statues were installed by MJW’s St. Vincent’s team. To avoid conflicts with pedestrian and vehicular traffic, the foundation and the setting of the statues were performed at night. The demolition, site work, sign relocation, electrical, hardscape and landscaping were performed during the day. The statues will remain at the entrance to St. Vincent’s Hospital as a reminder of the service the Daughters of Charity provided for the next 100 years or more.