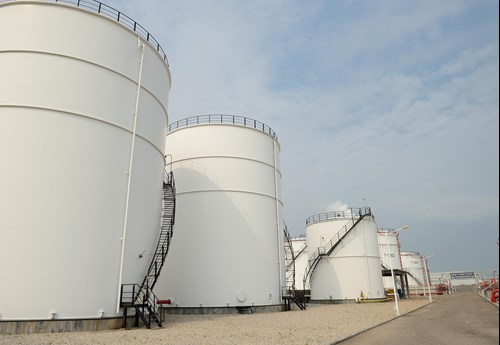 MJW was awarded a design-build project with CITGO at its Port Everglades facility to update its tank farm fire protection systems.

The issue CITGO needed to resolve was that all six of its large fuel tanks were protected by a single foam-water line, with selector valves for each tank on a manifold located inside of the tank containment dike. In case of a fire in one of those tanks, the responding fire brigade would hook up its fire truck to a fire department connection outside of the tank containment dike, prime the line and dispatch a fireman to open the appropriate selector valve to allow the foam-water fire extinguishing solution to flow to the specific tank that was on fire. The safety of firefighters was at greater risk by entering the tank containment dike, so to mitigate that risk, CITGO decided to install a separate fire protection line for each tank. CITGO called upon MJW’s expertise in designing fire protection systems at the Port, and for other CITGO facilities across the country. After working jointly on the initial project scoping and budgeting several different configurations, MJW was released to start the detailed design and subsequently the construction of the configuration that was acceptable both to CITGO and the local fire department.

In addition to designing the new piping and configuring it to allow the fastest possible demolition of the selector valve manifold and switch-over to the new system, MJW also designed a new pipe rack structure and foundations. The new structural steel fabricated at MJW’s shop in Lakeland, Florida, was installed on new concrete piers so that the new fire protection piping can be run to the fuel tank connection points. The new fire protection piping will first undergo a hydrostatic test and then full flow test with a fire department pumper truck. This process will be repeated for each of the six new piping runs. Once all of the system commissioning activities are completed and the new system is officially placed in service, the selector valve manifold will be removed.