MJW Consolidated recently completed a project for Marathon Petroleum Corporation in Jacksonville Florida. This was a multi-phased project beginning in October 2016 and completing in March of 2018. MJW utilized the services of our Fire Protection, Fire Alarm, Civil, Structural, Mechanical, and Steel Fabrication groups on this project.

The scope of work was to replace four existing 16” fuel lines and one 16” fire line with pre-fabricated supports on a 360 LF long fuel unloading dock on St. John’s River along with two concrete containment slabs, multiple concrete foundations and cross over stairs on the shore.

In lieu of working over water, our approach to this challenging project was to fabricate each 360LF long pipe section on land, on top of 17 temporary heavy duty neoprene roller supports, and pull it to its final place on the dock using a tugger.  Once the new piping was in place, the tie-ins to the existing piping on the dock and on land were completed during a 15 day outage. After the tie-ins were made and hydrostatic testing completed, the existing 16” fuel lines were cleaned and removed from the dock. Utilizing this approach, we minimized the impact on Marathon's day-to-day operations while at the same time abating the risks of environmental contamination of the St. John's River since the majority of welding, sand blasting, painting, and hydro-testing work was performed in a controlled environment on land.

Despite many scheduling challenges due to the weather as well as the requirement to accommodate frequent fuel tanker offloading activities on this active terminal, the largest in NE Florida, the project was completed on budget, ahead of schedule and without any environmental issues or recordable injuries.  As a result, Marathon awarded MJW a perfect score on their Contractor Project Scorecard for Safety, Environmental, Planning, Schedule, Quality, Equipment and Project Management performance. 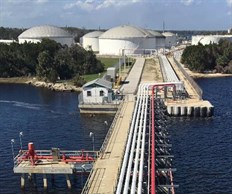 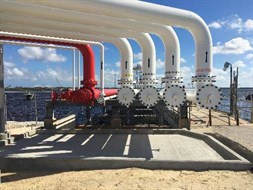