Calpine Energy Solutions has contracted with MJW to replace its anhydrous ammonia vapor suppression systems at its Pasadena, Texas, facility. The contract was executed in September of 2021, followed by the in-hous 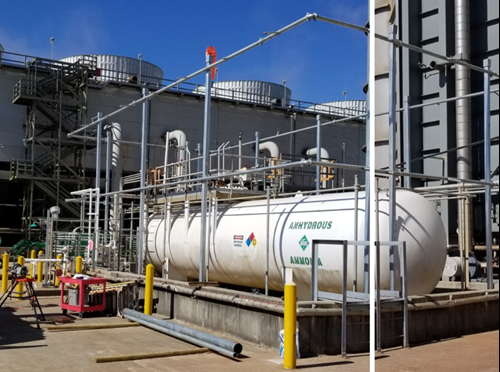 e design, procurement and fabrication, until the installation crew was mobilized in January of 2022.

The new vapor suppression systems include specialty misting nozzles that are spaced farther away from the anhydrous ammonia tanks, truck unloading station and vaporizing skid than what would be the case with a typical fire protection system, in an effort to create a large water envelope around them that would neutralize the ammonia cloud in case of the leak. The new systems are automatically activated by an existing ammonia vapor detection system. They can also be manually activated by a pull station located at the control valve of each system.

The project was completed in February of 2022, having successfully engaged collaboration between MJW’s engineering, fabrication, field installation, safety, quality control, and project management teams. This was a first partnership between MJW and Calpine, but MJW looks forward to bidding on more projects with Calpine and continuing the successful partnership that begun with this project.