After MJW performed successfully on two aircraft shelter projects at Cecil Field, Boeing showed its confidence in the company by awarding a contract for a third structure much closer to the airport’s two perpendicular runways, where safety considerations for managing traffic and eliminating foreign object debris (FOD) are paramount.

Work began in May on the project and is expected to be complete in August 2017. The large fabric-over-metal-frame structure, which will be erected by Big Top Fabric Structures, will house Boeing-made U.S. Navy F-18 fighter jets scheduled for program upgrades.

MJW is responsible for project management, including site preparation, building assembly oversight and installation of the complete electrical system for this structure, compressed air system to power the tools needed for work on the aircraft, and automatic compressed-air-foam fire protection skids with the flame detectors connected to the facility’s fire alarm system. MJW will also be installing a robust anchoring system that includes below-surface wire cabling to secure the building and deeply buried grounding points to tie-down aircraft.

As the work proceeds, MJW has assigned a full-time FOD manager to monitor the entire worksite for any debris that could be sucked into aircraft engines or turned into damaging projectiles by active aircraft traffic at this facility.

“We’re proud that Boeing has entrusted us with the special challenges of this project, which is a testament to our company’s commitment to safety and efficient performance in a wide-range of industrial and heavy-traffic environments,” said MJW project manager Chris Timpe. 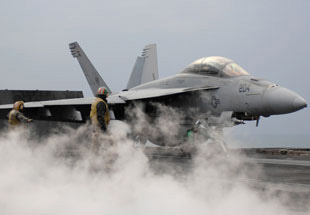